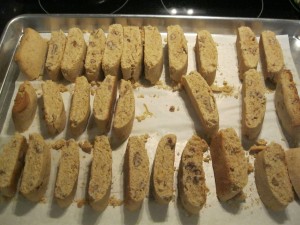 Last time we made biscotti I was a little disappointed. I felt like we needed more flavor…WELL TA-DAH… that is what Chef Brads Twice- Baked Biscotti is. It has orange zest, orange juice, and anise seed in it. Although I do have to say that I thought the texture of the first biscotti was better than this one. All in all I did like this recipe, and because of the orange and anise seed it wasn’t just plain-jane Biscotti. However I think that next time I am going to dip it into melted white chocolate which will only make it better!

Round up all of your ingredients. 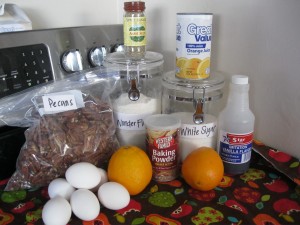 Now I couldn’t find crushed Anise Seed, in fact it was pretty hard to find Anise Seed in general. So not only was I able to find just Anise Seed, but I was able to finally get a mortar and pestle. I seriously felt like I was Julia Child, I’m still so excited about it! But just put my silly imagination aside, pour your anise seed into the mortar, and grind it. 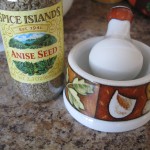 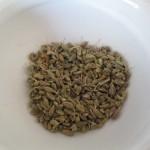 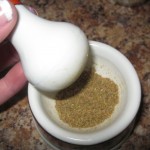 Next I got my oranges and zested them. I have to warn you though, PLEASE watch your fingers when zesting! I accidentally zested a little bit of my finger and it didn’t feel too good! 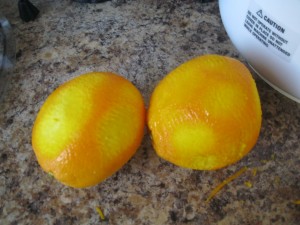 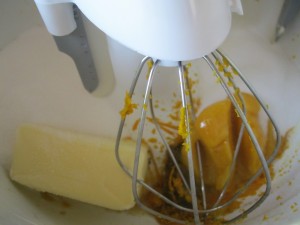 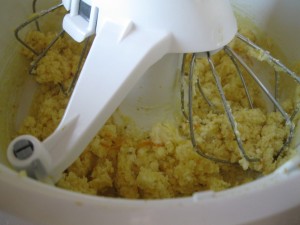 Then beat in your eggs 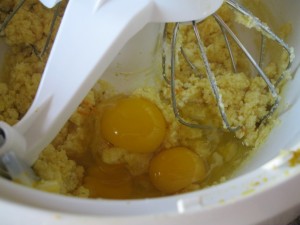 Add in your WonderFlour and baking powder and mix well. 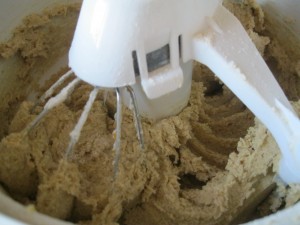 Note: I made a half batch which was more than plenty. But when adding the WonderFlour I had to add five cups because Chef Brad said that the dough should not be sticky. Well, it took me five cups to not be sticky…something to think about when making your Italian Biscotti.

Now add in the nuts of your choice and mix into your dough. (I chose pecans because that’s what I had in my pantry!)

Dump it out of your mixer and roll it into a ball, cover, and refrigerate for at least two hours.

Remove from the fridge 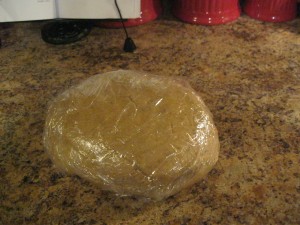 Now form two loafs on your pan, as long as the pan and 2-3 inches wide and about ½ inch thick. 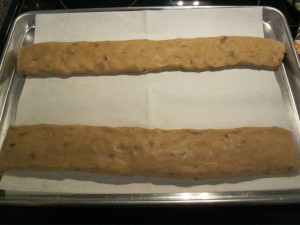 As you can see my measurements may be a little off. Bake for 20 minutes at 375 degrees then remove and cut –like in our last Biscotti recipe.

Replace back on the pan and bake for another 10 min. (Hence the term, TWICE BAKED Italian Biscotti.) Remove and let it cool and ENJOY!

So Until Next Time…