I would say I’m a spicy girl. Let’s be honest,  I like it hot but not to the point where my mouth turns into a fire hydrant! I say that only as a word of caution on this recipe. This is one SPICY cake. I also have to clarify that the recipe calls for pureed Chipotle chilies; however I could not find chilies to puree, so I finally settled for chipotle chili spice which is why it could have been packed with heat. What do you do though? When it calls for chipotle, you get the chipotle! I would suggest cutting the chili in half, depending on how hot you like your food to be.

I took the cake to our families Easter dinner, and to be honest with you all, it got mixed reviews. The consensus came back that it was “Too Spicy”. I also made both of the sauces that Chef Brad suggests: the caramel sauce and the honey glaze. The family absolutely loved the caramel sauce, (which I have to say was heavenly!) I did not put the chipotle chili in either of the sauces because I felt the cake was already “warm” enough.  Three of my cousins really enjoyed the cake, but confessed that it was pretty spicy.

Personally I was not a fan of the cake. Yes I like spicy, but I’m not a big fan of “smoky heat” and chipotle in my opinion has a smoky taste to it. That’s probably why it goes well with apples. But if nothing else I suggest at least trying it, you’ll never know until you try right? So like I said, feel free to decrease the amount of chipotle chili and I highly suggest eating it with the caramel sauce. And please let me know if you like it better made with fresh chipotle chilies rather than the spice, I would like to see how the heat factor is changed. 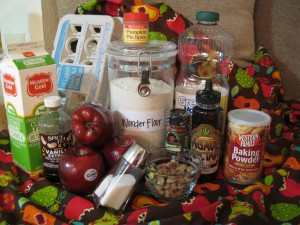 You’ll need to grate your apples. Use a fine blade, but not too fine of a blade or else it just kind of juices the apple while not really grating them. 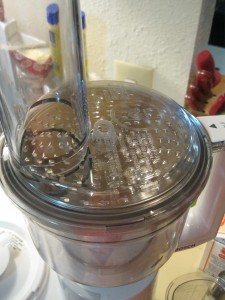 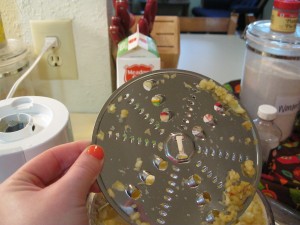 I used the bigger of the two blades because I wanted to get a bite of the apple in the cake and it worked out GREAT.

Then gather your pistachios and chop them. 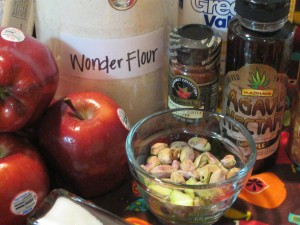 Finally you just combine everything and pour it into a pan.  Now chef brad say to put it in a large pan. I’m not quite sure what that consists of, but I put mine in a bunt pan and the excess in a loaf pan.

Then just step back and WHA – LA! You’re done.

Don’t forget to make your caramel sauce and serve. Just remember to keep a glass of milk close by because you are gonna need it!