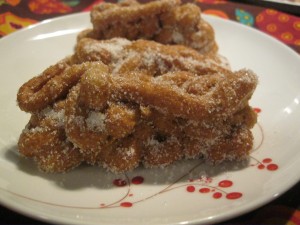 My Sophomore year of high school I was in a Spanish class- let’s just say that was the first and last time I took any sort of foreign language! At the end of the year we had a great fiesta – well as great as any high school party could be. I made a homemade piñata that was supposed to be a giraffe but looked more like a shot dinosaur…my other class mates brought Pace Salsa and Rosarita’s Refried beans, and it was a party to remember! Those memories have faded, but the one thing that I do remember the most is that my Spanish teacher brought homemade Churros.  I’m going to be blunt, her Churros looked like dog droppings and they didn’t really taste that good either…in fact they were really bad! Since then I have never tried any other Churros, and I was very hesitant to try Chef Brads recipe. However I was quite surprised to see how much my husband was enjoying them, so I tried one…not bad…my second one…kind of good and as you can see I enjoyed them a lot! I do have to say these weren’t like any other Churros that I had seen before. These weren’t thick and heavy, they were very light and fluffy. That could be due to the fact that the biggest tip for my piping bag wasn’t very big.

I really enjoyed them the way they turned out though. Now I need to know if all Churros are as good as these were, and if I should venture out to try some or if I should just stick to Chef Brad’s Churro Recipe. So please try these and let me know, because every time I go to the fair and see the Churros sitting under the heat lamp I’m tempted, yet never can bring myself to make the commitment.

Pull together all the ingredients 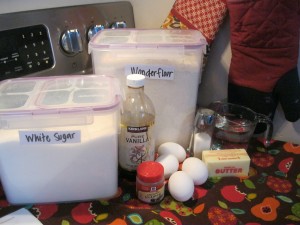 In a saucepan combine your water, butter, sugar, salt, and nutmeg and bring to a boil. Add your WonderFlour all at once and remove from the heat. Beat the mixture with a wooden spoon until it starts to pull away from the sides and forms a thick paste. (It happened pretty fast for me!) 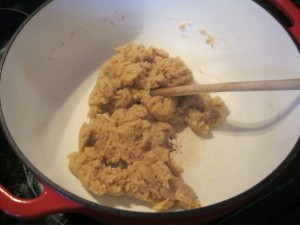 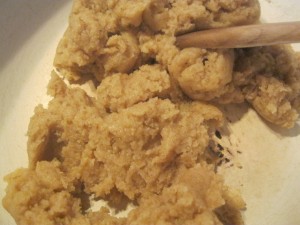 Next you should add your eggs one at a time, beating fast after each egg. 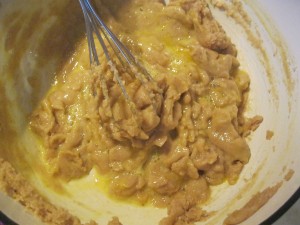 Beat until the dough is smooth. 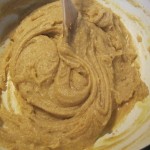 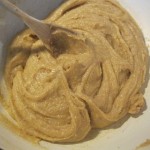 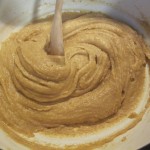 (I thought that a whisk would be good for this part and would incorporate the eggs nicely- but don’t do that! Just stick with your wooden spoon…)

Stir in your vanilla and then let the dough rest at room temperature for 15 minutes. While you’re doing that go ahead and get your fryer ready. Once the dough has rested, scoop it into your pastry bag, which you will want to fit with your largest star tip. (As you can see mine was pretty wimpy.) Squeeze out your dough into the fryer and use scissors to cut the dough at whatever length your desire. 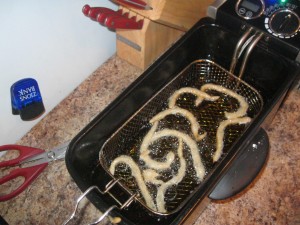 Fry until golden brown and then drain on a paper towel. 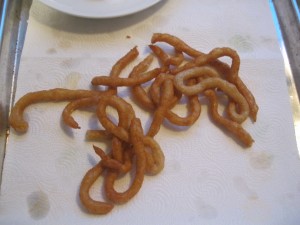 Roll your warm churros in sugar **MY FAVORITE** Or you can use powdered sugar, or a cinnamon sugar mixture. 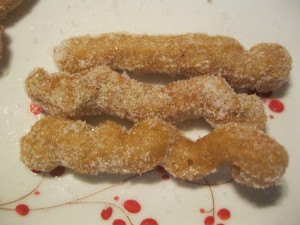 At  first I was squeezing the dough into the fryer- but straight into the oil. It wasn’t working so well, so next I brought the basket up and made little churros on the basket then dropped them down in the oil. 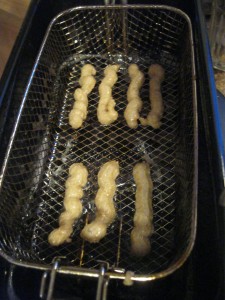 After a batch or two I just decided to squeeze the dough in the fryer and not care what they looked like! 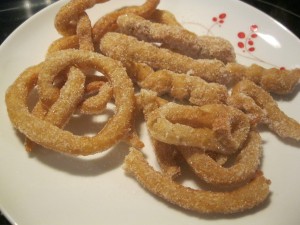 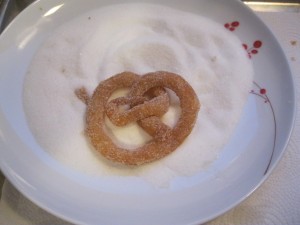 Hence the pretzel shaped one. When my husband found out what I was doing he really started to like them and wanted in on the action.  And of course he wanted a man size Churro, not one of these “little girl” ones, so please enjoy the next couple pictures! 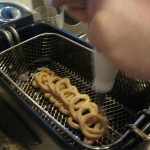 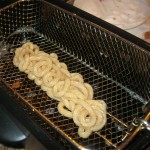 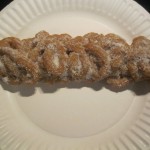 I then decide to follow suit, yet make mine just a little bit smaller 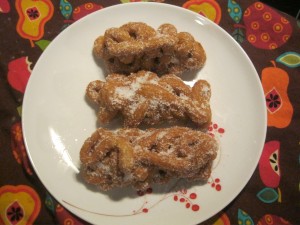 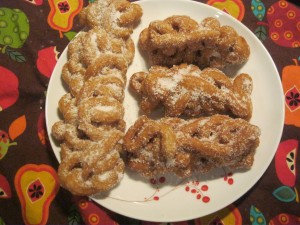 These were really good and so much fun to make, I would suggest doing it with your kids and letting them go crazy with the dough- much like my husband, but then I think hot oil+children….umm better not.